Asia Pacific in the Pilot Seat for the Global Aviation Sector

Strong population growth and rising income levels in the Asia Pacific region are fuelling demand for the region’s airports. And more than half of new air passengers are expected to originate from the region over the next 20 years.

Two important demographic trends continue to be very favourable for the Asia Pacific region: strong population growth and rising income levels.
What is less widely discussed is how these positive trends could ultimately lead to increased demand for the region’s real assets. Airports, in particular, are expected to be a significant beneficiary, with more than half of all new air passengers expected to originate from the region over the next 20 years.

The Asia Pacific has already seen the highest growth rates for air passengers of any region globally in 20181.

Much of this demand is coming from within Asia and outbound travel from China is particularly significant. For example, the country had the strongest growth for short-term arrivals to Australia for the year to June 2018, and was the largest source of visitors2. Similarly, China is New Zealand's second-largest international tourism market3, and Malaysia’s third (after Singapore and Indonesia).

Asia has some of the fastest country and city-based population growth rates globally. According to UN estimates, the region is second to only Africa. And Asian large cities keep getting bigger, with the number of ‘megacities’ in the region (settlements with more than 10 million people) set to increase by around 50% by 20304.

Centre of gravity to move east

The latest forecasts from the International Air Transport Association (IATA) show that Asia Pacific’s strong passenger growth will continue in the long term6.

By analysing the same population and income trends that we believe drive broader real asset demand, IATA’s data shows that the ‘centre of gravity will move eastwards’ in the global aviation industry, with more than half of new passengers over the next 20 years to originate from the region.

China at the centre

China is set to play centre stage in this passenger growth and IATA forecasts that global passenger volumes are set to double to 8.2 billion over the next 20 years. Given this growth, by 2025, China will have displaced the US to become the largest single market globally.

Airline commercial market outlooks, such as those provided by Boeing, also have China as the largest domestic-travel market by the end of the decade7.

The Chinese airport regulator (CAAC) also has positive projections on future growth. They forecast strong passenger growth for the Beijing region, with passenger numbers expected to grow around 6% per annum to 2025 (to 154 million)8. 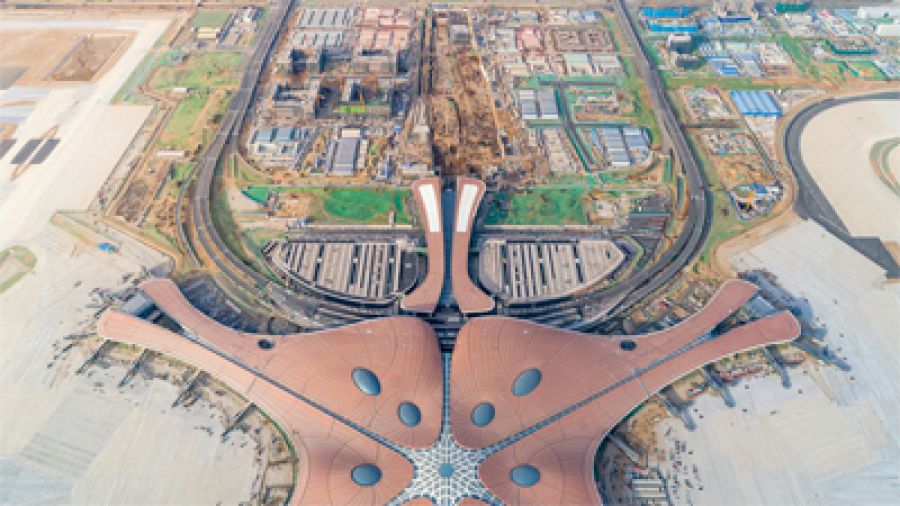 Indeed, based on our recent discussions with a Chinese aviation expert, even higher passenger numbers are possible in the longer term (around 200 million) based on Beijing’s population growth and higher disposable income.

In fact, a new airport, Beijing Daxing, is under construction (expected to open this year) to help deal with this demand.

Other airports across the Asian region are also looking at expansion plans as well as possible stock exchange listings, providing further opportunities for our Asia Pacific Real Income strategy.

Increased protectionism could pose a risk to these growth forecasts, and current US-China trade tensions point to these very real possibilities.

The ‘centre of gravity will move eastwards’ in the global aviation industry.

That said, tourism-related aviation has thus far been excluded from any trade discussion, and recent industry statistics show no material deceleration in passenger growth in line with any slowing pace of economic growth within China. Air cargo could still be impacted, but most tariffs have been placed on bulky goods that do not use air freight (such as steel or aluminium).

If we did see a reverse in globalisation, and more protectionist policies arise, we still believe that passenger growth for the region will be positive due to demographics trends, albeit at a more modest pace.

Investing in both the outbound and inbound growth

So, how is the Martin Currie Asia Pacific Real Income strategy poised to benefit from these positive air travel trends?

We see the investment opportunity in the region’s airports, rather than airlines themselves9. The Asia Pacific Real Income strategy only invests in low-risk listed real asset companies that have large sunk capital bases with high barriers to entry, such as airports.

We are well positioned to capture the benefits of rising air travel with holdings in a number of key airports across the region, including Sydney Airport, Beijing Capital International Airport, Auckland Airport and Malaysia Airport10 which are capturing the growth in both outbound and inbound passengers.

What’s more, we continue to monitor emerging countries for opportunities that will leverage off these powerful trends as we believe the most exciting prospects for global aviation rests in the Asia Pacific region

1 Source: IATA; as at 12 December 2018: “Economic Performance of the Airline Industry” report; passenger growth denotes Revenue Passenger Kilometers for 2018; retrieved from: https://www.iata.org/publications/economics/Reports/Industry-Econ-Performance/IATAEconomic- Performance-of-the-Industry-end-year-2018-report.pdf
2 Source: Australian Bureau of Statistics, as at 20 August 2018: 3401.0 - Overseas Arrivals and Departures, Australia; retrieved from: http://www.abs.gov.au/ausstats/abs@.nsf/mf/3401.0
3 Source: Tourism New Zealand, as at 31 October 2018; retrieved from: https://www.tourismnewzealand.com/markets-stats/markets/china/
4 Source: UN Population Division Department of Economic and Social Affairs; as at 30 November 2018: “World Urbanization Prospects: The 2018 Revision” report; retrieved from: https://population.un.org/wup/
5 Source: Brookings Institution: as at 31 March 2018: “The Unprecedented Expansion of the Global Middle Class: An Update: February 2017” report; retrieved from: https://www.brookings.edu/wp-content/uploads/2017/02/global_20170228_global-middle-class.pdf
6 Source: IATA; as at 24 October 2018: “IATA Forecast Predicts 8.2 billion Air Travelers in 2037” (press release), retrieved from: https://www.iata.org/pressroom/pr/Pages/2018-10-24-02.aspx
7 Source: Statista, Boeing; as at July 2018: “COMMERCIAL MARKET OUTLOOK 2018–2037”, retrieved from: https://www.boeing.com/resources/boeingdotcom/commercial/market/commercial-market-outlook/assets/downloads/2018-cmo-09-11.pdf
8 Source: CAAC; as at 21 January 2019: “CAAC Issues Two Programs for Operation Transfer to Beijing Daxing International Airport” (press release), retrieved from: http://www.caac.gov.cn/en/XWZX/201901/t20190121_194161.html
9 We do not classify airlines as a real asset sector, as they are inherently volatile, with high competition, modest barriers to entry and exposure to fluctuating fuel costs.
10 The information provided should not be considered a recommendation to purchase or sell any particular security. It should not be assumed that any of the security transactions discussed here were, or will prove to be, profitable.