In defence of natural gas: an ESG perspective

Australia’s energy mix cannot consist of renewables alone, and we believe that natural gas has a role to play in the transition to a lower carbon future.

As part of our focus on ESG1, Martin Currie Australia looks at what companies are doing to reduce emissions, improve air quality and mitigate the ever-present risks of greenhouse gases and climate change, and how that could impact long-term investment performance.

However, Australia’s energy mix cannot consist of renewables alone, and we believe that natural gas has a role to play in the transition to a lower carbon future. As such, while we screen out thermal coal from Ethical Income portfolios, we do not advocate for a binary view on the exclusion ofall fossil fuels right now.

The challenge is to ensure the transition to renewable energy continues, and remains sustainable in the future

As discussed in a focal point in July last year, based on client feedback, in April 2019 we screened out all coal related activity, including the mining, extraction, transport and burning of thermal coal for power generation, from our Martin Currie Australia Ethical Income portfolios.

While we do like AGL for its moves towards renewables, it is excluded from Ethical Income due to its current coal use in the power generation mix.

In its place, we have invested in substitutes such as New Zealand utilities which generate largely renewable energy. This includes Contact Energy, which generates 80% of its power from geothermal and hydro2. We also invest in natural gas producers such as Woodside Petroleum.

Our substitutions have contributed to the significantly reduced carbon footprint of our portfolio when compared to a broader Australian market index such as the S&P/ASX 200.

Gas is an important lower emission alternative to coal

A key question we often get in relation to reducing emissions is why we do not exclude Woodside Petroleum from Ethical Income portfolios, given it has the highest emissions of any one stock in the portfolio. In fact, Woodside is a ‘top three’ position in the strategy5.

We are fully aware that Australia’s energy mix cannot consist of 100% renewables alone. Natural gas is a much lower carbon emitting fuel than coal or other fossil fuel alternatives for base load electricity generation, and we see that it can help to reduce the overall carbon intensity of electricity generation over time.

Gas is already part of the solution globally

In fact, the International Energy Agency (IEA) have released data that shows that the transitioning from coal to gas has already significantly helped slow down the growth in emissions.

The following chart shows the CO2 savings since 2010 where countries have increasingly used gas as an alternative to coal.

While specific data for Australia isn’t available, the US is very significant in this context given the commercialisation of coal seam gas reserves over the last decade, and China, given its size.

Gas is part of the fight for cleaner air in China

My colleague Daniel Fitzgerald discussed the "Greenification” of China in a recent focal point, and how cleaner air is now a key priority for Chinese officials. The IEA report also shows that monthly gas consumption is rising quickly in China, and this is helping to improve the overall air quality.

Tools to assist in documenting the transition

MSCI ESG Research has been providing insight and analysis on ethical screens for over 20 years. As of 2018, they have been providing Low Carbon Transition Scores for each company. This considers the extent to which companies are currently exposed to the transition to a lower carbon economy, and how they are managing the risks and opportunities in the ongoing transition. 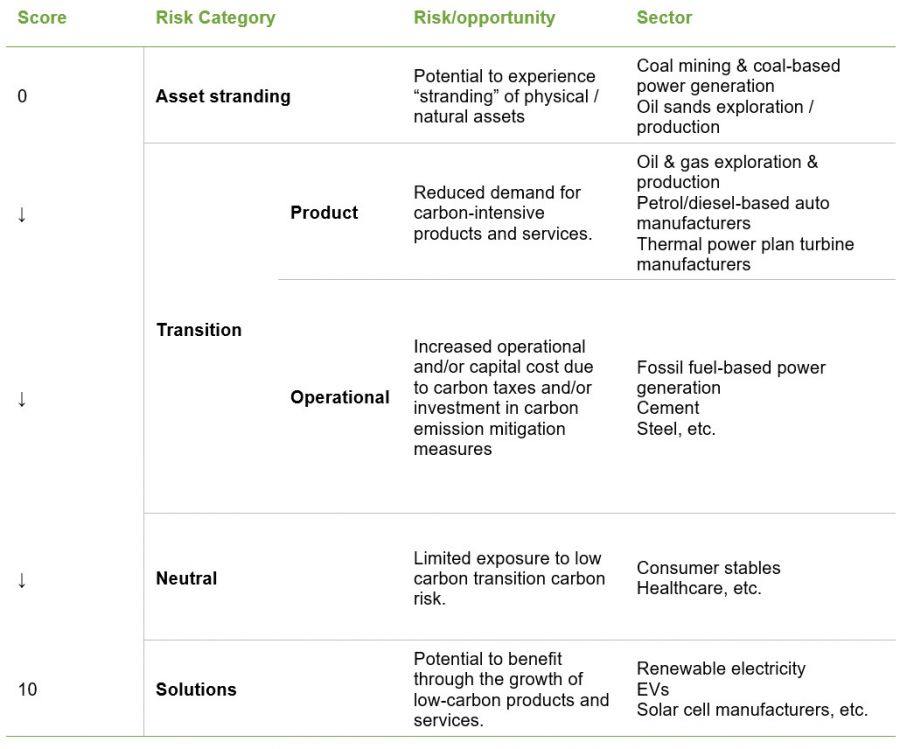 Using this scoring database, we can measure the progress of our Ethical Income portfolio versus the Australian market.

You can see in the graph that the Ethical Income strategy is better than the market in terms of owning companies that are transitioning towards a low carbon environment.

Woodside Petroleum does score low on MSCI’s low carbon transition scale (2.0)12 as a company with ‘Product transition risk’. One example of such a risk is the revenue compression for gas companies from zero-emissions cars. However, they also have upside from an interim decarbonization solution.

As Australia’s largest natural gas producer, Woodside is in a strong position to excel here. Through our engagement with the company, we are comfortable that Woodside Petroleum is one of the highest quality operators in the oil and gas industry and that mitigating these risks is top of mind for their management.

Natural gas will continue to be a significant part of Australia’s transition to renewable green energy, which has many decades to go. We are happy to continue to advocate for this part of the solution. The investment challenge will be to ensure the transition continues and remains sustainable in the future.