In most countries, populations are getting older and living longer, with clearly increasingly onerous implications for the corresponding expenses (healthcare, pensions and social benefits/care)...

In most countries, populations are getting older and living longer, with clearly increasingly onerous implications for the corresponding expenses (healthcare, pensions and social benefits/care). To complicate matters further, the current flow of fit young migrants to the developed world is probably set to diminish, given the prevailing nationalist/protectionist sentiment in many countries, demanding jobs for the locals. This results in a rapidly reducing working population and an increasing tax burden, to be shared among less citizens.

Taxes are still equal to Death in terms of certainty, but they will be increasing in magnitude, while Death seems to be slowing in terms of its ETA (Estimated Time of Arrival)!

Demographics are particularly unhelpful in (economically) developed countries. In the UK, for example, there are currently 46.5 pensioners for every 100 working age citizens1. According to the latest UN report on World Population Ageing2, these hundred workers are expected to be supporting 56.5 pensioners in 2030, a 22% increase.

Japan is famously the oldest population in the world, with 78 pensioners per 100 workers. In 10 years’ time there will be 91 pensioners for every 100 working citizens. There are clear implications for government debt – yet already the country has the second biggest debt pile (after the USA), with government debt equal to 198% of GDP3. How is this financed? The Bank of Japan holds 44% of the Japanese government bonds in issue4. Not every country can do that!

For the record, the USA goes from 42 to 54 pensioners (+28%) in the same time frame, while Australia, a relatively young country with a better superannuation system than most, will go from 34 to 44 pensioners per 100 citizens by 2030, a 27% increase5.

Emerging markets are not immune

However, emerging markets are not immune; Chile, the pioneer of compulsory contribution pension systems, has recently experienced extraordinary social unrest, partly fuelled by the inadequacy of pension payments and the continued erosion of social benefits. The demographics are not favourable: in the next 10 years, the 26 pensioners per hundred working Chileans become 38, an increase of 46%6.

The Kremlin is well aware of its own vulnerability. Russia is a predominantly resource based economy constrained by sanctions, with a large working population that is educated, but not growing. That’s why it has built a robust macroeconomic moat around itself. The country has very low external debt (28% of GDP ) and its reserves are equal to 1,078% of short-term debt. For reference, the UK’s reserves are at 3.1% and the USA’s at 2.1%.

Government revenues depend on tax

The importance of tax revenues for governments has been inexorably rising. The OECD average stands at 34.2% of GDP for 2018, with VAT accounting for 20%. For reference, the UK and Australia are around the OECD average, whilst the US is at 27% of GDP, probably because this number does not account for state level taxes. There is however a big difference in the rate of tax collection – most developed countries’ tax revenues are at 20% of GDP whereas emerging countries’ average is 14%10.

Given their increasing importance, tax revenues have become priorities for most governments. The numbers that they are looking at are reflected in the following chart, which is based on work done by The United Nations University World Institute for Development Economics Research, in partnership with the International Centre for Taxation and Development (ICTD). 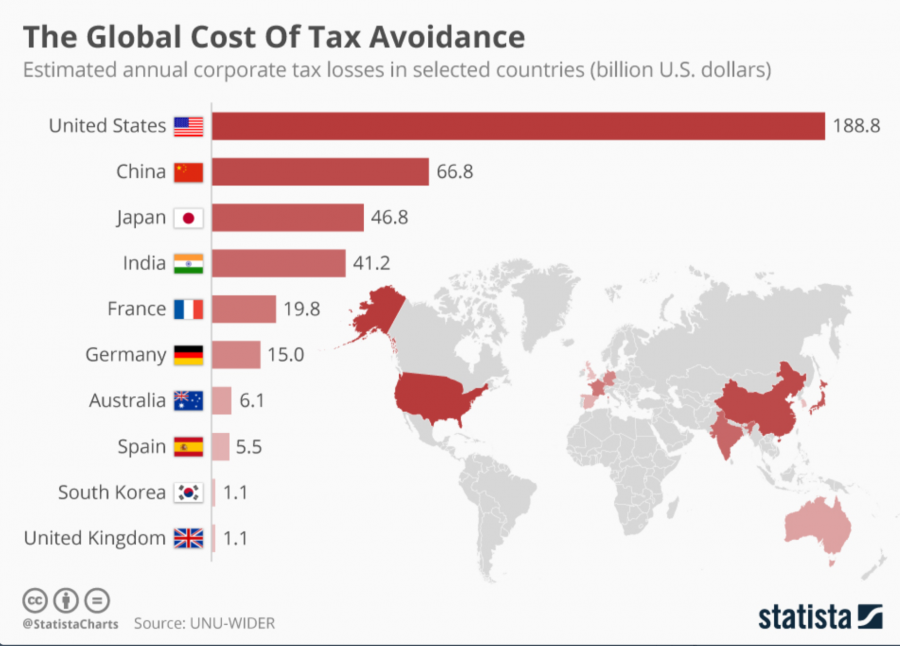 In 2010, the Kremlin implemented reforms that simplified processes and moved all tax collection online. In Russia, all businesses now have their cash registers linked to the Tax Service, and information on every retail or company to company transaction is recorded real time. This has raised VAT receipts by 20% and minimised the need for inspections, as the use of artificial intelligence has revealed patterns which help to pinpoint suspicious activity, which raises the efficiency of inspections.

The digitalisation of tax has pushed into the less formal sectors, by way of an app that allows childminders and Uber drivers to pay 4% directly at source and thus legitimises these workers.

So successful has the overhaul of the tax system been, that its architect, Mikhail Mishustin, was named Prime Minister in the January 2020 cabinet reshuffle.

Death is slowing, Taxes are growing

Essentially it is clear that governments around the world are going to be investing aggressively in technology and in improving tax collection. Then, the actual rate of taxation will inevitably be raised, in order to cope with the added burdens. Robots are increasingly viable as replacements of human workers, but they are unlikely to be paying taxes…

Taxes are still equal to Death in terms of certainty, but they will be increasing in magnitude, while Death seems to be slowing in terms of its ETA (Estimated Time of Arrival)!