What history tells investors about the coronavirus outbreak

On 30th January 2020 The World Health Organisation (WHO) declared the new Coronavirus a Public Health Emergency of International Concern (PHEIC).

The declaration effectively triggers a higher profile reaction from the WHO, involving higher cooperation and the provision of technical support2, not only to China but also to other countries that may lack the infrastructure to deal with a spreading outbreak. For laypeople, there is now a new official name: COVID-19.

History offers the best guide for us in terms of how the stock market may perform against the backdrop of the ongoing coronavirus (2019-nCoV) outbreak. The most obvious reference point is the SARS (Severe Acute Respiratory Syndrome) outbreak of 2003. From its discovery in February 2003, the SARS outbreak lasted approximately six months as the disease spread to more than two dozen countries in North America, South America, Europe, and Asia before it was stopped in July 2003.

We suspect the market will follow a similar pattern and will recover rapidly when there is evidence that the number of new cases has peaked.

Below is a chart of the MSCI AC Asia ex Japan spanning the period immediately before and after the outbreak. Firstly, it is important to note that it was a very different world back then: China is 16.3% of world GDP today versus 4.3% in 2003 (Source: IMF); and the SARS outbreak occurred during a period of very weak market sentiment, while the coronavirus came in previously positive market environment.

However, there are some similarities in terms of the disease: we can tentatively say that the reproduction number3 of the virus is similar to SARS, its incubation period appears to be a little longer and the mortality rate appears to be broadly similar. Additionally, the Chinese authorities reported the coronavirus very quickly (with SARS it took them almost 3 months) and have responded more aggressively in terms of its containment strategy. It is therefore hoped that the time to halting its expansion will be similar to SARS (i.e. around 4 months from the date when the WHO announced a global emergency).

Asian stock markets only became aware of SARS in early / mid-March 2003 when reports of the illness began to emerge, with the WHO formally issuing a global alert on 12th March 2003. As you can see in the chart below, the market bottomed shortly thereafter.

Stock markets are discounting mechanisms and respond swiftly to bad news. By the time of the WHO confirmation, markets were already partially pricing it in. The Asian markets remained volatile within approximately a 10% range and began to recover as data revealed that the number of new SARS cases appeared to be peaking (the peak turned out to be the 23rd April). A full-blown rally was underway by July when the US CDC (Center for Disease Control) lifted its travel alert for China, with the WHO declared global containment a few days later. 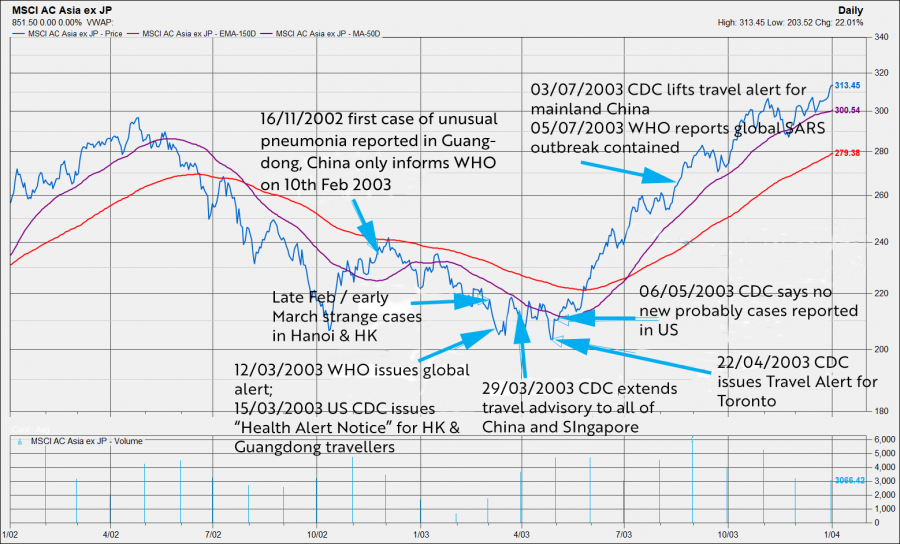 We suspect the market will follow a similar pattern and will recovery rapidly when there is evidence that the number of new cases has peaked. For SARS approximately 6 weeks elapsed from the initial global alert from the WHO and the emergence of enough data to encourage investors that the worst was past. Investors will be watching closely for signs of this.

Since the coronavirus hit the headlines, MSCI AC Asia ex Japan declined by 7.5% from its January 2020 highs, but at the time of writing has recouped around one third of this; the Chinese A share markets, which were closed for an extended Lunar New Year holiday, re-opened today and caught up with other regional indices, closing sharply lower on their first day of trading (SSE Composite -9.95% and the China Shenzhen SE A Share Index -6.61%) but made meaningful recoveries since then (SSE recouping 40% of losses and Shenzhen 75%).

Valuations today are higher than in 2003: MSCI AC Asia ex Japan FY1 PER is 15x versus 11.6x at end February 2003 and the FY1 PBR is 1.56x versus 1.23x. It is not obvious to us that this valuation gap will be completely closed during this ‘risk-off’ phase as interest rates are lower today and governments are more primed today to respond to market volatility than in 2003.

Additionally, prior to the outbreak there was accumulating evidence that the global cycle, backed by supportive policy action, was beginning to improve. If the market does move to fresh lows, we expect it will only hold those levels briefly and rebound sharply on the first indications that the number of new cases of infection has peaked.

Meanwhile, bond funds saw significant inflows in the last week, as investors are beginning to bet that the peak of the outbreak is near and concerns over the negative impact on the world economy are outweighed by the expectation of big stimulus from Beijing and other capitals, as central banks feel obliged to be proactive, to compensate for a soft first quarter of economic activity. The buying has been fairly widely spread, boosting Greek bonds, as proxies for a renewed appetite for risk assets.

1https://www.who.int/news-room/detail/30-01-2020-statement-on-the-second-meeting-of-the-international-health-regulations-(2005)-emergency-committee-regarding-the-outbreak-of-novel-coronavirus-(2019-ncov)
2 https://www.who.int/emergencies/diseases/novel-coronavirus-2019/technical-guidance
3A statistic calculated by epidemiologists which measures the number of people that one person can infect