Tough at the top

Every year, 10 million high-school students take the Gaokao, China’s national higher-education entrance exam. The prize is a potentially large one; for many students, particularly those from a poorer background, it could be a life-changing opportunity.

There is huge emphasis placed on academic excellence, and immense pressure to succeed…it’s not much wonder that parents are willing to spend more on after-school tuition

There is huge emphasis placed on academic excellence, and immense pressure to succeed. With this in mind, it’s not much wonder that parents are willing to spend more on after-school tuition (AST).

According to some reports, parents are spending thousands of yuan a year on private lessons, with tutoring on subjects including English, Maths and Literature even being provided to primary-school age pupils.

This is leading to a boom for AST companies, with particularly high-growth areas including K-12 (primary and secondary education). It’s not hard to see the parallels with what is happening in China now with another high-achieving Asian nation, South Korea, where in the 1980s, increasing competition for university places led to a huge rise in profits for the AST industry.

However, there is a threat for many of the recently established operators in China. While not relenting on its academic ambitions, China has threatened the industry with increased regulation. The government has promised greater oversight and improved compliance among AST providers. We believe this could lead to greater consolidation of the market, to the benefit of some of the leading companies. 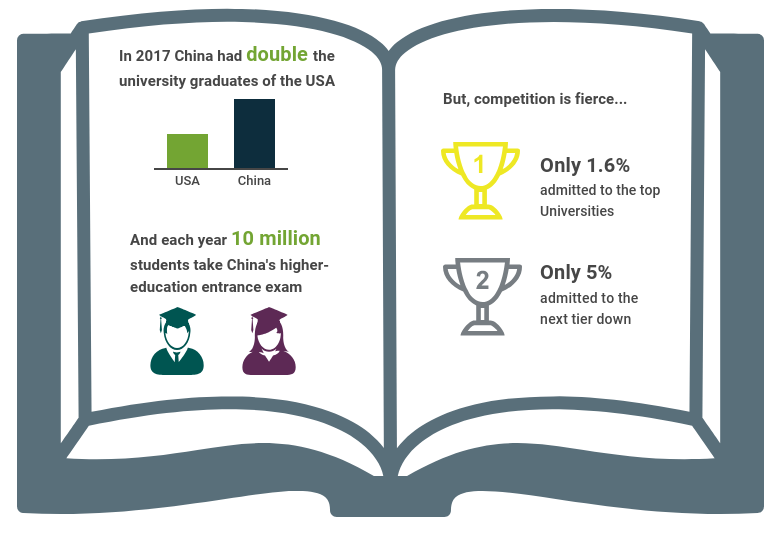 We are seeing resilience among some of the larger players which means they should continue to grow, even with the potential for further regulation. One of the main ways they are doing this is a shift to online learning, with the use of video content and live support from teaching assistants, rather than traditional classrooms.

This is having the impact of reducing the companies’ capital intensity, as well as improving their reach –being able to take their products to a greater number of students.

New Oriental Education, for example, has evolved out of an English-language training facility. It has been leading the push for a greater online presence, teaming up with Tencent to develop mobile teaching applications – giving students access to a database and network of teaching assistance.

With the Gaokao of paramount importance to parents wanting to give their children a head start in life, we believe the prospects are good for the AST sector to see continued growth. The companies that are staying at the forefront, using technology and adopting new teaching methods are best placed to reap the benefits.

The information provided should not be considered a recommendation to purchase or sell any particular strategy / fund / security. It should not be assumed that any of the security transactions discussed here were or will prove to be profitable.